How your subconscious mind creates reality

Are you aware that 90% of reality lies in the subconscious mind?

When you look at a picture of an iceberg, where 10% of it is above water and the other 90% is below water, that is how your mind works. Only 10% of your “mental software”, or the way you think, is in the conscious mind (you are aware of it). The biggest part of your software programming is under the surface, you don’t even see it.

Here is a great example:

There was a professional athlete that came to work with me. He was retired, and everyone thought that because he was a retired athlete and somewhat of a celebrity, he was going to be a super successful in this financial services company. Well, he wasn’t. He was struggling.

I asked him one question, “If you had one sentence that happened over and over again in your mind that you believe created your success, what would it be?”

He said, “That’s easy, my dad said this all the time, it doesn’t matter how strong or fast you are, it matters how hard you work. I developed a legendary work ethic, I outwork my competition, I am outworking them right now. But I’m not succeeding.”

Do you think this is a really great success command to build your life and success with?

It doesn’t matter how strong or fast you are, it matters how hard you work.

There’s an interesting problem with this sentence. Cut that sentence in half so it reads, “It doesn’t matter how strong are fast you are.”

What child would you say that to? A slow and weak child.

The dad gave him the “key to success” and his young mind used that command to create success. It worked in athletics because he went from grade school to college always outworking his competition and using his speed and strength to win.

And it was because of the subconscious program that was installed by his father when he was a young boy.

Take a moment to sit and listen with the subconscious mind when you are making statements that tell you what success is, or what failure is, and how you create success. The biggest place to change your mental software, the strategies and thinking you use to create success, is in the subconscious. 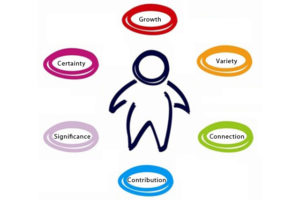 The 6 Human Needs: A Way of Understanding People’s Behavior

The 6 human needs are one axis of examining human[...]

The 14 Presuppositions of NLP

Each one of these NLP presuppositions explains often-unexplainable human behavior[...]