How long does it take to break a habit?

In the early 1970’s, NASA was running long-term tests on astronauts for the Mars program. I didn’t discover this until years later, but one of the scientist running these tests was actually two doors down the street from me! They were running various tests and studies, and one was putting astronauts in a six-month disoriented environment. And the way they did that was they put goggles on them that flipped everything upside down. And one of the things they discovered was the answer to, “How long does it take to break a habit?”

This is a great metaphor because when you understand how you really see the world, do you realize that the way your vision works is you’re literally seeing things upside down? Because of the way the lens refracts images onto the back side of your brain, it actually inverts them.

So they put another lens in front of the eye to refract things right side up, so the brain now sees things upside down. So they had the astronauts wear the goggles for six straight months and observed and studies the psychological stress it caused and how they adapted. So ponder this, if you’re sitting at a dinner table, the table is upside down, the fork is upside down, the plate of food is upside down, and you’re trying to figure out how to eat upside down!

Two things came out of the study that were unintended consequences. The first thing was one day the astronaut would wake up, and everything was right side up again. Their brain adapted, they still had the upside down goggles on, and they’re suddenly seeing right side up again. And that blew the scientist’s minds! The earliest it happened was 14 days, the average time was 21 days, the longest was 30 days.

Now, here’s the second unintended consequence that was really fascinating: Let’s say on day 18 it hadn’t flipped yet, and there’s a family emergency and you have to take your goggles off for four hours and take care of your family, and you come back to NASA and put your goggles back on. If you have the type of brain that is going to flip at 21 days and it is day 18, do you believe that:

a. because you came out of goggles for four hours, you flip at 21 days plus 4 hours, or
b. by just coming out of the goggles for a minute, you completely reset the clock to zero. You’re at day 18, you disturb the routine, does it just add some time to the flip, or does it zero it out and you have to start all over again?

It starts all over again! And this is where people get frustrated. They will say, “I only broke my habit one meal and it’s not 30 days to change. I’ve been seven months trying to change it and there’s no changing.” Because you don’t understand how your mind and brain works!

It flips when you’re consistent. And if you do that, was going back to the old habit one time worth it? No. Of course not. Not if you understand how it works.

So having access to this research and this tool allows you to say “No” to your old habit. It helps you sustain the new habit because you understand how your mind actually works now. You have the science, the technology, to understand how to break habits and how long it takes to form new ones.

A Common Language Pattern That Hinders Your Success

Have you ever heard the phrase “failing with honor”? When[...] 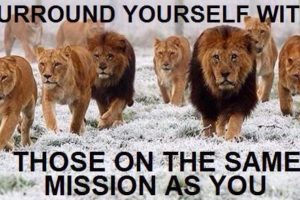 How the People You Surround Yourself With Affect Your Success

There is a principle (and there’s different variations of[...]