A lot of people believe that in order to be a rockstar, they need to sell a bunch of albums first. When one of their records goes platinum, or they sell a certain number, then they can officially call themselves a rockstar. This is a common pattern for a lot of people in any form of career, but it is not how the most successful people think.

There are two ways we perceive reality.

Some people are a product of their environment, what goes on around them and the things that happen to them shape their reality and who they are. The evidence creates their beliefs. Other people believe things about themselves or their reality, and the things around them reflect those beliefs. Their beliefs create the evidence. For the top 10% of the world, the people who have all the love, money, and happiness, it is the latter.

At the most fundamental neural level, the way our brains create our reality for us, beliefs always create the evidence. Picture an intersection with one person standing on each corner and they all witness an accident in the middle of the intersection. Do they all see the same accident? They see the same two cars hit at the same exact time, but they all have different vantage points. They see from a different angle and they all have their unique perceptions of car accidents. One person could have never seen an accident before, one could have been in a dozen accidents, and one person attends MADD meetings because their child was killed by a drunk driver. So even though they see the same accident, they all have different realities of the accident. Their preexisting beliefs are creating reality for them.

Examine your beliefs and how you create reality today. Are you looking at the evidence for why you don’t have something or why you keep failing? Are you making excuses based on the things that have happened to you as to why you are struggling with something? Or do you truly believe in yourself and your abilities to do the best you can and sing your song?

Everything will begin to shift for you when you stop focusing on the evidence and get clear on your beliefs about yourself and your reality that will produce Greatness.

In this episode I’m joined by my fellow coaches Dan[...] 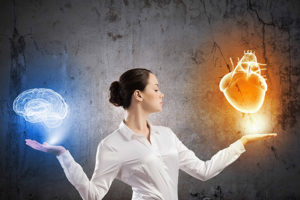 The Difference Between IQ and EQ Leadership

IQ and EQ leadership is one of the fortes and[...]

Great Leaders Own Everything

The first challenge that most leaders have is that they[...]